Cecil Rhodes is on record as saying he had only met two creators in South Africa, one being himself and the other James Douglas Logan. Born in Reston, Scotland in 1857, Logan emigrated to South Africa at the age of nineteen. Based upon years of research in South Africa and the United Kingdom, and using original archive material (including many unseen photographs) Dr Allen’s fascinating book explores how James Logan made his fortune in nineteenth century South Africa through business, politics and a high profile association with the British Empire’s favourite sport – cricket.

Empire, War & Cricket in South Africa explores in detail how Matjiesfontein was created and how Logan developed this little Karoo town into a renowned health resort, attracting the rich and famous – including South African novelist Olive Schreiner and England cricketer George Lohmann. But above all, this is the untold story of how James Logan was instrumental in developing the game of cricket in South Africa.

“This book is a significant contribution to the burgeoning field of sports history and society. The author does well to demonstrate the linkages between sporting endeavours and wider societal currents in South African society during the heyday of empire. It is more than just a sports history and also more than just a political history. Its strength is the way in which it melds the two to provide a new perspective on a turbulent South African past.”

“Dean Allen’s book is an example of original biographical history at its best. He has used extensive archival material from South Africa and the UK – some of which he accessed for the very first time – in order to explore the important themes of sport, politics, and power during a key period of South African and British Imperial history. He cleverly relates James Logan’s love of cricket and his personal career to the wider processes of colonialism.”

“Dean Allen’s book explores the many complexities and contradictions of South African sport in its formative years. Using the life and career of James Logan as its lens, this is a book that offers a unique insight not just into cricket, but also into South African society on the eve of war. It is essential reading for cricket lovers in particular, sports fans in general and anyone interested in the history of South Africa.” 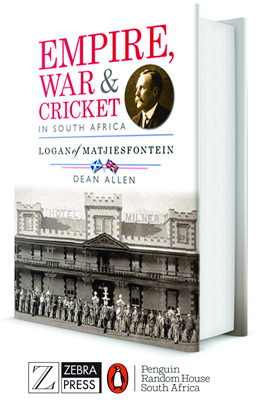